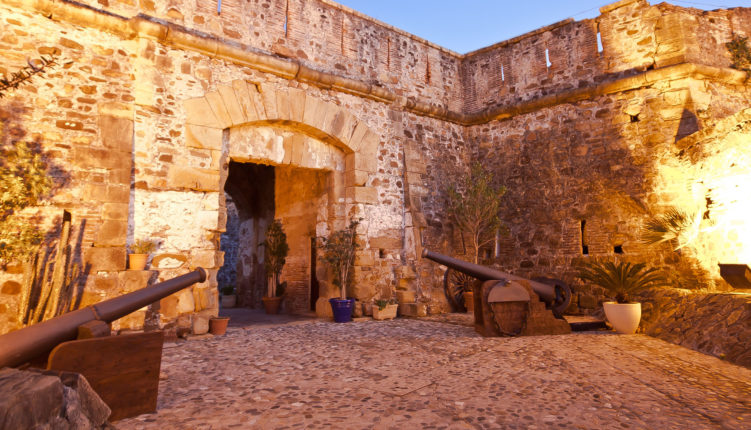 Excavations in 1989 uncovered much of the village’s infrastructures making it one of the most extensive in Andalucia. It includes a bath house site to the south of the castle now in a fenced off plot overlooking Plaza del Baños Romanos. The bath house consists of two large chambers and a hot house whose under-floor heating system can be clearly seen. White mosaic floors in other areas have survived. To the west of the bath house between the castle and the main road once stood a Roman villa. To the north of the castle where the Guardia Civil barracks once stood is the location of the industrial part of the town. This is now a waste ground car park. Fish paste tanks have been excavated here along with water conduits and salt pans. A little north of the barracks there is the site of a Roman necropolis or graveyard. We hope the excavation will continue and the extensive site can become a historical attraction. The castle itself was built in 1767 by Francisco Paulino of Seville. As a reward to his industry and his services to the castle builders, who found work hard to come by at that time. The Spanish King Carlos III granted Paulino the command of a company of cavalry. What he did with them is a matter of conjecture. The old rhyme of the Grand Old Duke of York springs unfairly to mind. Today the castle is used as municipal offices, trainee workshops and the site for traveling museums. The well behaved and unobtrusive visitor is unlikely to be challenged and ejected. From the Plaza de los Baños Romanos down to the sea defenses are a number of quaint bars and restaurants. This is where the sea front promenade ends. You can walk from here to east to Duquesa Marina, but not any further west. It has an air of the little forgotten village. Some of the seafood restaurants are very popular so somebody must know about Castillo de la Duquesa. Small Oasis | New apartments ready for sale in Duquesa from 97.500 €